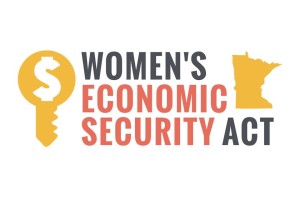 Last week, the House Jobs and Economic Development Finance and Policy Committee approved a bill authored by State Representative Sandra Masin (DFL – Eagan). The bill, included in the Women’s Economic Security Act, was approved on a voice vote and re-referred to the House Ways and Means Committee.

According to a new report by the University of Minnesota Humphrey School’s Center on Women & Public Policy, families headed by women are four times more likely to be living in poverty and that women earn a median pay of 80 percent of what men earn.

“These bills are designed to make sure all workers have equal rights and opportunities in the work place,” said Rep. Masin. “More and more households are depending on women to support them financially, and now is the time to address the barriers that are still in place for those women.”

Rep. Masin’s bill would bar any discrimination or retaliation against an employee who talks about salaries and wages with fellow employees.

During the committee hearing, Leah Olm shared the story of a friend who found out she was earning less at her job than a male in the same position. Olm said her friend’s boss threatened to fire her for asking male coworkers how much money they earned, which is how she found out about the pay gap in the first place. “This package would clear the way for a more equal playing field,” said Olm.

The Women’s Economic Security Act builds on Minnesota’s positive economic momentum by ensuring equal opportunities for women to succeed in the workplace and provide for their families. Members of the public, small business owners, and religious organizations testified in support of the bill at today’s hearing.

Kathryn Mollen, Policy and Outreach Coordinator for the Minnesota Catholic Conference (MCC) said her organization wants to ensure that women have access to a workplace that supports family economic security and motherhood.

“This act is an important step towards those goals,” said Mollen.

The other components of the legislation heard during last week’s committee hearing were:

This entry was posted in Uncategorized. Bookmark the permalink.

This site uses Akismet to reduce spam. Learn how your comment data is processed.